The leopard gecko is a nocturnal ground-dwelling lizard naturally found in the deserts of southern Central Asia, and throughout Pakistan, to the northwestern parts of India. Unlike most geckos, leopard geckos possess movable eyelids. It has become a well-established and popular pet in captivity. 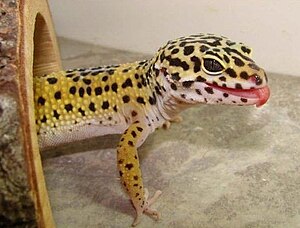 Leopard geckos were first described as a species by zoologist Edward Blyth in 1854 as Eublepharis macularius. The generic name Eublepharis is a combination of the Greek words Eu (true), and blephar (eyelid), as having eyelids is what distinguishes members of this subfamily from other geckos. The specific name, macularius, derives from the Latin word macula meaning “spot” or “blemish”, referring to the animal’s natural spotted markings.

The native habitat of the leopard gecko is the rocky, dry grassland and desert regions of south-Asian Afghanistan, Pakistan, north-west India, and parts of Iran. Winter temperatures in these areas can be quite low, below 10 °C (50 °F), forcing the animals underground into semi-hibernation, called brumation, living on fat reserves. As nocturnal creatures, they spend the day hidden under rocks or in burrows to escape the daytime heat and emerge at dusk to feed by hunting insects. These Geckos are solitary, and do not usually live with other animals.